Fleeing to the Altar

1 Kings 1:50-53 (New International Version)
But Adonijah, in fear of Solomon, went and took hold of the horns of the altar. Then Solomon was told, “Adonijah is afraid of King Solomon and is clinging to the horns of the altar. He says, ‘Let King Solomon swear to me today that he will not put his servant to death with the sword.’” Solomon replied, “If he shows himself to be worthy, not a hair of his head will fall to the ground; but if evil is found in him, he will die.” Then King Solomon sent men, and they brought him down from the altar. And Adonijah came and bowed down to King Solomon, and Solomon said, “Go to your home.”

Adonijah was the oldest surviving son of King David, and he incorrectly assumed that, as eldest son, he would be heir to the throne. Without his father’s knowledge, he hosted his own coronation party and pronounced himself king. But David had already chosen Adonijah’s little brother, Solomon, to succeed him him as king of Israel. When David heard about Adonijah’s self-arranged coronation, he was outraged and ordered the priests to publicly declare Solomon king.

Zadok the priest took the horn of oil from the sacred tent and anointed Solomon. Then they sounded the trumpet and all the people shouted, “Long live King Solomon!” And all the people went up after him, playing pipes and rejoicing greatly, so that the ground shook with the sound. Adonijah and all the guests who were with him heard it as they were finishing their feast. On hearing the sound of the trumpet, Joab asked, “What’s the meaning of all the noise in the city?” Even as he was speaking, Jonathan son of Abiathar the priest arrived. Adonijah said, “Come in. A worthy man like you must be bringing good news.” Jonathan answered, “Not at all! Our lord King David has made Solomon king!” (1 Kings 1:39-43)

As soon as Adonijah heard this, he realized that he had made an enormous tactical error. A mistake that would likely cost him his life. So he ran to the altar of God — the place of sacrifice — and held on for dear life. 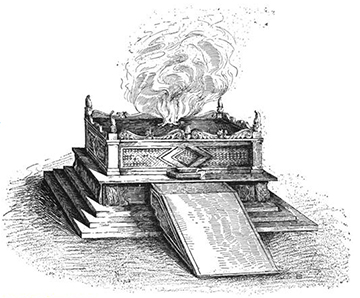 Bronze Altar of the Temple (courtesy of JewishEncyclopedia.com)

One commentary, written in 1871, explains why Adonijah would do this strange thing: “The horns or projections at the four corners of the altar… were symbols of grace and salvation to the sinner… The altar was regarded as a sanctuary. … Adonijah, having acted in opposition to the will of the reigning king, was guilty of rebellion, and stood self-condemned.”*

So Adonijah, recognizing his guilt, sought refuge. He sought shelter. He sought safety and forgiveness. He sought grace at the altar of God.

And he received it. King Solomon forgave Adonijah and told him just to “go home.” His life was spared.

Each of us makes mistakes, some of them more serious than others. Each of us sins, each of us misses the mark. But each of us has access to the forgiveness and grace of God. All of us have the ability to flee to the altar of God, holding on with everything in us to the promise given to us in Jesus Christ for refuge and shelter. Hebrews 9:24 and 26 tell us: “For Christ did not enter into a holy place made with human hands, which was only a copy of the true one in heaven. He entered into heaven itself to appear before God on our behalf. … Now, once for all time, he has appeared at the end of the age to remove sin by his own death as a sacrifice.”

Question:
What does it mean to you that sacrifice has already been made (past tense, permanent, and completed) for your sins? How do you understand what Jesus has done for you?

* Jamieson, Fausset, and Brown, The Commentary Critical and Explanatory on the Whole Bible.