Exodus 1:8-14 (New Living Translation)
Eventually, a new king came to power in Egypt who knew nothing about Joseph or what he had done. He said to his people, “Look, the people of Israel now outnumber us and are stronger than we are. We must make a plan to keep them from growing even more. If we don’t, and if war breaks out, they will join our enemies and fight against us. Then they will escape from the country.” So the Egyptians made the Israelites their slaves. They appointed brutal slave drivers over them, hoping to wear them down with crushing labor. They forced them to build the cities of Pithom and Rameses as supply centers for the king. But the more the Egyptians oppressed them, the more the Israelites multiplied and spread, and the more alarmed the Egyptians became. So the Egyptians worked the people of Israel without mercy. They made their lives bitter, forcing them to mix mortar and make bricks and do all the work in the fields. They were ruthless in all their demands.

Good morning! This is the first week of our four-week series we’re calling ROAR!  It’s based on the themes from our upcoming Vacation Bible School, which begins on June 17th. Over these next few weeks, our Sanctuary will be transformed with our VBS decorations!  This year, you will see in this space the creation of an amazing jungle as we prepare to welcome well over a hundred children to our campus!

During this series we’ll explore some of the same themes that the kids will, looking at the same scripture: the Book of Exodus. The tagline for the ROAR Vacation Bible School curriculum is: “Life is wild. God is good.” Pretty cool, I think! They are going to have so much fun!

In pondering how to adapt a kids’ theme for us adults, I started thinking about what “ROAR” means…

As a noun, “roar” can mean “the deep cry of a wild animal” — the Merriam-Webster Dictionary uses the example of a lion’s powerful cry. This was the first thing I thought of when I heard the VBS theme. Maybe it sprang to mind first because I was looking at the ROAR logo with a big ol’ lion on it… 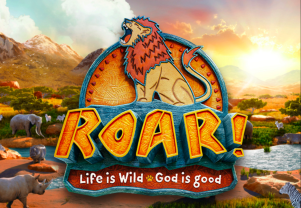 But “roar” can also mean a loud, continuous sound. For example, one of my favorite sounds in the world…

the roar of ocean waves crashing on a beach.

Roar can mean a boisterous, loud, energetic outcry, like the sound of sports fans at the end of the game when their team wins…

the roar of the crowd!

And “roar” can also mean… a loud, deep cry of pain or distress or anger. And it’s this sense of roar that we’ll be looking at today.

The story of Exodus begins with a little exposition, a setting of the scene, letting the reader know the background of all that is to happen. The Book of Genesis (the opening book of the Bible) ends with the story of Joseph, who became the second most powerful man in the land of Egypt. He was Pharaoh’s right-hand man, and, using his influence, Joseph saved his very large family from certain death during a long famine. Joseph’s family, called the “Israelites,” settled down in Egypt, and made their lives there.

But by the time of our scripture today, many, many years have passed — generations! — and the scriptures tell us that the new Pharaoh, the King of Egypt, didn’t remember Joseph as a leader. He just saw the large number of his family’s descendants, foreigners living all throughout his land, as a threat to the safety of his kingdom. And so… he enslaved them.

Men, women, the elderly, parents, the young, all now slaves in Egypt. The conditions were horrible, as they were forced to do back-breaking work of building cities for those who enslaved them. In chapter two, we’ll hear that the people cried out, groaning to God in the pain and distress and anger. Lifting up their spirits in prayer, they roared out their anguish to God.

You’ve heard me say this many times over the years, but one of the things that breaks my heart wide open in pain is this:

With that in mind…

I’d like to read to you this morning from a book that few non-clergy people ever see, let alone open: The Book of Discipline of The United Methodist Church. It’s kind of the rulebook of our denomination, and it is revised every four years — this is the 2016 version. Changes to the language therein will be discussed (no doubt with vim, vigor, & vitriol) at General Conference next year, in 2020.

In this book, which is neither light nor exciting reading, there is a section called the “Social Principles.” It’s a long statement about all sorts of issues, from science and technology, rights of children, sustainable agriculture, divorce, health care, church and state relations, and on and on. It is a pretty impressively comprehensive document.

And you may be surprised to learn that it is one of the reasons I fell in love with The United Methodist Church.

Not because I agree with every single word in those Social Principles — I don’t!!! — but because I was so impressed that a church would take the time to thoughtfully and prayerfully consider a God-honoring response to each of the issues raised.

The rights and privileges a society bestows upon or withholds from those who comprise it indicate the relative esteem in which that society holds particular persons and groups of persons. We affirm all persons as equally valuable in the sight of God. We therefore work toward societies in which each person’s value is recognized, maintained, and strengthened. We support the basic rights of all persons to equal access to housing, education, communication, employment, medical care, legal redress for grievances, and physical protection. We deplore acts of hate or violence against groups or persons based on race, color, national origin, ethnicity, age, gender, disability, status, economic condition, sexual orientation, gender identity, or religious affiliation. Our respect for the inherent dignity of all persons leads us to call for the recognition, protection, and implementation of the principles of The Universal Declaration of Human Rights so that communities and individuals may claim and enjoy their universal, indivisible, and inalienable rights.

Okay… I just totally violated one of my preaching rules: never read a long passage from the Book of Discipline! Thanks for sticking with me through that!

Why did I read that section? Because it matters for the way we live out our faith. At the end of just about every worship service, I close with these words: “What we have said with our lips in this hour, may we believe in our hearts. And what we believe in our hearts, may we practice in our lives.” Our faith is meant to be a lived faith, an active faith, one that makes a difference in our world — not just for us, but for those around us as well.

In the Day 1 curriculum for the ROAR VBS is “When Life Is Unfair… ROAR!” Merriam-Webster defines “unfair” as “marked by injustice, partiality, or deception.”

I’m going to really push my preaching boundaries here this morning, and quote from yet another Methodist policy book, this time The Book of Resolutions:

The United Methodist Church believes God’s love for the world is an active and engaged love, a love seeking justice and liberty. We cannot just be observers. So we care enough about people’s lives to risk interpreting God’s love, to take a stand, to call each of us into a response, no matter how controversial or complex. The church helps us think and act out a faith perspective, not just responding to all the other ‘mind-makers-up’ that exist in our society.

This is a fundamental part of who we are, who we are meant to be. It is so fundamental to our faith, in fact, that it is a part of the ritual that marks the entrance into the life of faith: baptism!

In the ritual of baptism, we usually ask four questions of those being baptized:

First: Do you renounce the spiritual forces of wickedness, reject the evil powers of this world, and repent of your sin?
[response: I do!]

Do you accept the freedom and power God gives you to resist evil, injustice, and oppression in whatever forms they present themselves?
[response: I do.]

Do you confess Jesus Christ as your Savior, put your whole trust in his grace, and promise to serve him as your Lord, in union with the Church which Christ has opened to people of all ages, nations, and races?
[response: I do.]

According to the grace given to you, will you remain a faithful member of Christ’s holy Church and serve as Christ’s representative in the world?
[response: I will.]

I’ve often thought, as I read those questions to people being baptized, that the order of those four vows was a bit wonky. A few times I’ve actually changed the order, asking first the questions about acknowledging Jesus as Savior and serving as God’s representatives, because, after all, that’s where the Christian faith begins.

But think about those questions that we ask! If you’ve been in church for any length of time, you have, no doubt, heard them before. Perhaps you remember answering them yourself, if you were baptized as an adult. These questions are important. These questions were created, crafted with intention and purpose, meant to be a launching pad for our faith!

In baptism, we ask forgiveness for our sins, we acknowledge Jesus as our Lord as the core of our faith, and we promise to serve as Christ’s representative in the world.

We say yes all to this… but what does it mean? How do we serve as Christ’s representative in the world? That second vow tell us how!

Do you accept the freedom and power God gives you to resist evil, injustice, and oppression in whatever forms they present themselves?

It’s right there in the words of our baptism.

From the time of John Wesley on, from the very beginning of the Methodist movement, this faith, it was meant to be a faith that makes a difference. A faith that moves each of us to look around our world to witness where things are not in line with God’s will, where people are being harmed, where God’s love is not reaching.

And we are called not just to see it, to acknowledge it, but to do something about it. That roar of discontent, of heartbreak, of disillusionment within our spirits, that feeling that something needs to change… that is God roaring within us.

May our voices ROAR,
using whatever influence
and resources and power
God has given us to speak
for those who cannot speak for themselves.

May our actions ROAR,
accepting the freedom and power
God has given us
to actively and boldly resist evil,
injustice, and oppression,
in whatever forms they present themselves!

May our lives
positively ROAR
with God’s grace and love!