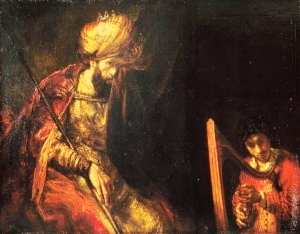 1 Chronicles 6:31-32 (New Living Translation)
David assigned the following men to lead the music at the house of the Lord after the Ark was placed there. They ministered with music at the Tabernacle until Solomon built the Temple of the Lord in Jerusalem. They carried out their work, following all the regulations handed down to them.

What a great statement: “they ministered with music.” Music has the ability to touch our spirits in ways that mere words sometimes cannot. The notes reverberate deep within us, calling us to deeper connection with God.

As a young man, David had direct experience with the power of music. When King Saul was deeply troubled, David would be called in to play his harp. The music soothed Saul and he began to feel better.

The first line of William Congreve’s play The Mourning Bride is: “Music hath charms to soothe the savage breast, to soften rocks, or bend a knotted oak.”

I always thought the line was “Music has charms to soothe the savage beast.” But the point is the same: music can have a powerful effect on us. David knew that music was a gift from God, with the potential to restore, inspire, and enliven. And so he ensured that music would be a part of worship in the Temple.