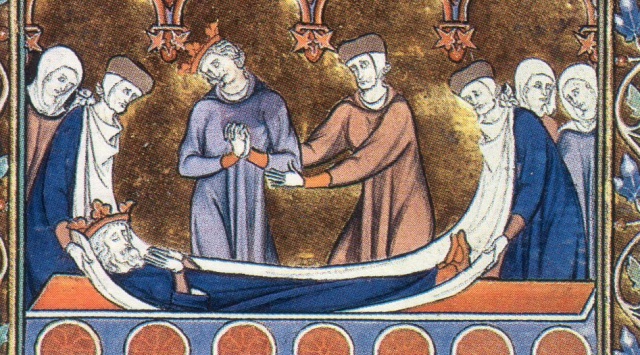 The funeral of King David, while his son Solomon watches (from a medieval manuscript)

1 Chronicles 29:23-28 (New American Standard Bible)
Then Solomon sat on the throne of the Lord as king instead of David his father; and he prospered, and all Israel obeyed him. All the officials, the mighty men, and also all the sons of King David pledged allegiance to King Solomon. The Lord highly exalted Solomon in the sight of all Israel, and bestowed on him royal majesty which had not been on any king before him in Israel. Now David the son of Jesse reigned over all Israel. The period which he reigned over Israel was forty years; he reigned in Hebron seven years and in Jerusalem thirty-three years.

David knew he would not live much longer, and so he established his son Solomon as the next king of Israel. David didn’t wait until his death to have Solomon crowned — he himself was witness to the coronation of Solomon as co-regent. He was ready to pass the crown to his son.

David had made mistakes during his reign as king of Israel — some of which had dire consequences — but he had lived his life with one goal: serving the God who had rescued him time and time again, and who had forgiven and loved him in spite of his imperfections. As he reached the end of his life, he could look forward with hope to what God would continue to do through his people.

Before the start of the 2014 Olympics, the world watched as the Olympic torch was relayed across thousands of miles. The moment of transfer is often a bittersweet moment. Your part of the race is completed. The goal has been reached. And now it is time to allow another person to run their part. No one person can do it all — or should do it all.

The New Testament records these hopeful words from the apostle Paul to a young man he was mentoring in Ephesus: “For I am already being poured out as a drink offering, and the time of my departure has come. I have fought the good fight, I have finished the course, I have kept the faith; in the future there is laid up for me the crown of righteousness, which the Lord, the righteous Judge, will award to me on that day; and not only to me, but also to all who have loved His appearing” (1 Timothy 4:6-8).

How wonderful to have that kind of assurance, not just when we reach the end of our lives, but right here in the midst of it, as well. No matter what stage we’re at in life, we all have opportunities to pass on our knowledge, wisdom, and faith to the people around us. We have chances each day to follow Jesus’ example of love, forgiveness, and grace. We can be honest about our mistakes and flaws, and seek direction and reconciliation. We can allow our words and actions to speak volumes about the healing work God has done in our lives, and the eternal hope we have in God’s gracious love.

We can run the race before us with joy and with trust in God’s guiding hand.

Question:
How do you feel about the “race” you’re running right now?

1 Response to Passing the Torch