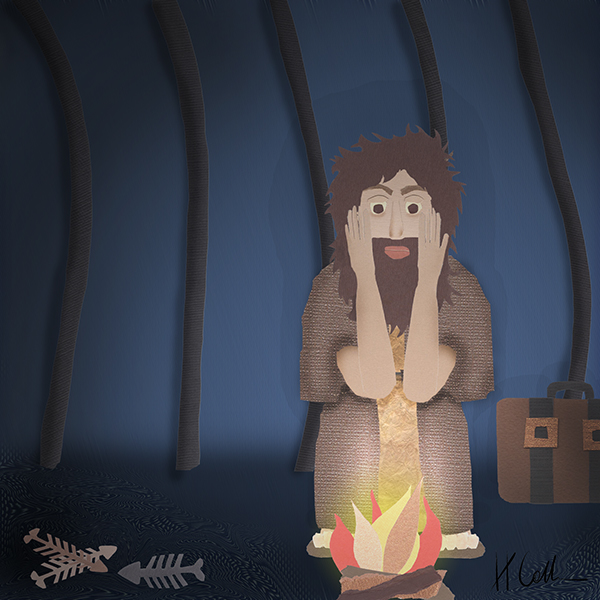 Jonah 1:13-14 (New Living Translation)
Instead, the sailors rowed even harder to get the ship to the land. But the stormy sea was too violent for them, and they couldn’t make it. Then they cried out to the Lord, Jonah’s God. “O Lord,” they pleaded, “don’t make us die for this man’s sin. And don’t hold us responsible for his death. O Lord, you have sent this storm upon him for your own good reasons.”

The sailors now know why the storm has been sent. Jonah has confessed that it’s his fault, and has suggested that the men pick him up and throw him overboard. It says a lot about the kindness of these men that they don’t unceremoniously chuck Jonah into the water. After all, they are terrified of the storm!

Instead, they try to get to land as quickly as possible. Their desperation is shown in the word used for “rowed even harder” in verse 13: hatar. It means “to dig.” This was not the first voyage for these men. They knew how to use the oars on the boat. And yet they “dig” the oars into the water. Amateur rowers will sometimes think that the deeper the oar is placed in the water, the faster the boat will go. But that is just not true. If you’ve ever watched expert rowers, you may have noticed that the blades of the oar are pulled back as soon as the oar is fully covered by the water. It skims just beneath the surface. “Digging” the oar deep into the water doesn’t help. It only makes it harder to row.

Question:
When has panic or desperation caused you to act foolishly?

Extra:
If you were one of the sailors facing the storm, and you heard Jonah’s confession, would you have elected to try harder to get to shore, or would you have immediately pitched him overboard?