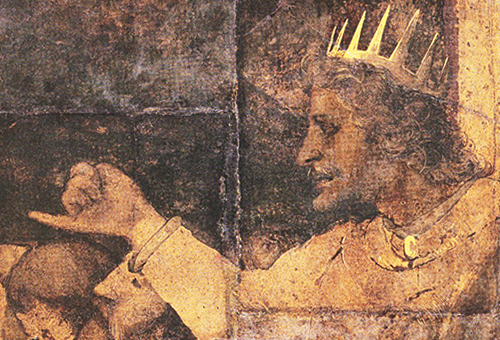 2 Chronicles 9:29-31 (New Living Translation)
The rest of the events of Solomon’s reign, from beginning to end, are recorded in The Record of Nathan the Prophet, and The Prophecy of Ahijah from Shiloh, and also in The Visions of Iddo the Seer, concerning Jeroboam son of Nebat. Solomon ruled in Jerusalem over all Israel for forty years. When he died, he was buried in the City of David, named for his father. Then his son Rehoboam became the next king.

Through David and Solomon’s reigns, Israel had grown and prospered. Rehoboam would have learned at the feet of his grandfather and father, and we could assume that he would be even greater. After all, could a future king ask for better mentors?

And yet… Rehoboam’s time as king begins with an unqualified failure. He travels to Shechem for his coronation, and is confronted by a group of Israelites, who ask their new king to lighten the demands for conscripted labor and heavy taxes.

At first it seems that Rehoboam is taking wise action: he immediately seeks out his father’s advisors, and asks them how he should proceed. They tell him, “If you are good to these people and do your best to please them and give them a favorable answer, they will always be your loyal subjects” (10:9).

Rehoboam is not happy with this answer, and so he heads instead to consult with his friends, who counsel him to ignore the crowd’s pleas and to make their lives even more difficult: “This is what you should tell those complainers who want a lighter burden: ‘My little finger is thicker than my father’s waist! Yes, my father laid heavy burdens on you, but I’m going to make them even heavier!'” Rehoboam told the crowd exactly what his friends suggested.

This — shockingly enough — did not go over well.

When the people hear Rehoboam’s declaration, they respond angrily: “‘Down with the dynasty of David! We have no interest in the son of Jesse. Back to your homes, O Israel! Look out for your own house, O David!’ So all the people of Israel returned home. But Rehoboam continued to rule over the Israelites who lived in the towns of Judah. King Rehoboam sent Adoniram, who was in charge of forced labor, to restore order, but the people of Israel stoned him to death. When this news reached King Rehoboam, he quickly jumped into his chariot and fled to Jerusalem. And to this day the northern tribes of Israel have refused to be ruled by a descendant of David” (16-19).

Not a great start.

Question:
When have you ignored good advice?

* Painting of Rehoboam from a fragment of the wall painting originally in the Great Council Chamber of Basel Town Hall, Switzerland, but now kept at the Kunstmuseum Basel. Licensed under public domain via Wikimedia Commons.